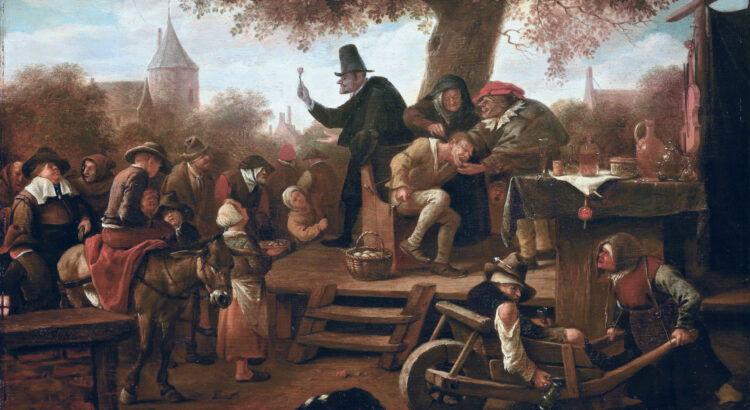 My non-IT friends makes a joke of me, always asking what I do for a living. Its really hard to explain for a fire-fighter or a librarian but I try to keep it ELI5. “I help organisations and their people to become adaptive to the constant changes around so their business can thrive. Very much like a gardener and his flowers.”

A court jester was, during the Middle Ages, the Renaissance and the Baroque, a joker who accompanied great men and/or performed at royal courts. The joker´s function was, as we all know, to entertain his master, but he had another more important responsibility; to present the bad news to his master without risking beheading. However, there were always limits for the joker as well. Charles I of England’s court jester Archibald Armstrong was one of our time’s first great Doubters and was finally expelled from the court after insulting the Archbishop of Canterbury. But before that, he managed for several years to keep his job by amusing and insulting the royal family, but also to tell the truths no one else dared.

The boom of Agile opened up a new market for Agile coaches like me. In my role as an Agile coach and consultant, I often feel like a court jester, shining the light on the problems and opportunities no one sees, or dares to see. For example, I have a habit of, during the first month with a new customer, writing down all the new concepts and strange words I hear and asking what they mean and why. Some people probably wonder why the Almighty does not understand better, while others sneak up afterwards and say thank you for finally getting the answer! After every tenth word in my sheet, I call out loud” BINGO!” and may explain to those around me why I did it. Playing Bullshit Bingo has become a sport of mine, which means collecting words or abbreviations that few people probably understand and/or dare to challenge. You may think that this is marking words, but it is with words that you apply suppression techniques and let others understand that you know best. Personally, I now struggle hard to live as I learn and not write slang in this book, which I otherwise often use in private. When working for my clients I often find myself acting like a court jester, someone you can cry out to, and one of the advantages of the consulting job is that I often get to know more about the condition of the organisation than the management does.

By doubting the status quo and thinking critically, rather than CYA (Cover Your Ass/taking care of myself), I take on the heat from people who are not as safe as I am. In my opinion an Agile coach must shoulder the role as a court jester and convey the message upwards when no one else dares. Otherwise, you feed the culture with uncritical, old fashion thinking where the boss always knows best. As a court jester, you step on toes in your eagerness to amuse and doubt. But you enjoy the luxury of being detached from the policies that often govern the agenda, so you can afford it if you are in a safe environment. By stepping on toes, you get peoples legs to move and make the blood pump, rather than they are standing in the same corner all day. We call this change, but most people do not like it. And even if it’s necessary for survival, they rather live in their comfort zones until retirement…

The opposites of the court jesters are the unexperienced Agile coaches, whom I call quacks. On one hand they spew their dissatisfaction over the organisation they work in, while, in plenary rubbing their home cooked liniment onto stiff limbs’, preaching new buzzwords like SAFe, FURPS etc.  Quacks were a guild in the 19th century where ineffective medical treatments were given without the necessary medical knowledge. In the strict sense, a quack is a person who, without authorization, conducts medical activities reserved for doctors educated and licensed in medicine. In a broader sense, the word ins now generally used in the sense of performing tasks, or supplying opinions, without accurate knowledge and education, in areas that require formal competence. Quacks in an Agile coaching context act with a one size fits all approach and ordinate the same solution for different problems whilst jesters see beyond the problem and have a pragmatic approach to make the patients/customers understand the root cause, and thus solve the problem themselves.

The difference between a Jester and a Quack is the level of competence. Here is my definition of competence, and if you multiply it by five you will get the variable Competence as I use it for my REAL TEAM.

Let me explain the formula:

C = Competence is the function of…

Once I interviewed a suitable person for the Scrum master role. At the end we turned him down as he just had one year of experience from Agile ways of working. One year later I was offered to attend a SAFe framework certification for free (I would never pay for it), and much to my surprise – he was the teacher and became my inspiration for my analogy of the Quack.

Agile Coach has become an elastic role for good and bad, spanning from SEK 700 to 1600 per hour as consultants. Generally, it is great with this elastic role, but it comes with false expectations as it is a huge difference between being a stand-in for a missing Scrum master and creating an agile topology and culture in the whole organisation. New Agile coaches with shiny certificates, preaching frameworks with great certainty and bushy gestures, are causing more confusion than salvation when their different messages are spread. I am convinced it’s better to doubt a little than believe too much. I am (too) often called in to support a company with their agility needs, and in the eyes of the people there I become “Just another Agile coach doing his things. Let him be and continue as before.” After digging into the cemetery of PowerPoints’ and other information without actual implementations, it is hard to catch up with creating actual results in just six months (standard length of a first contract) by having to clean up from the Quacks first.

Agile coaches are not responsible for Psychological Safety, but they should be the Jester we all need as they are in a position to see that the emperor is naked and prevent him from selling his home cooked fake liniment!

This is a part of the book Psychological UNsafety from the trenches you can order or read more about here.