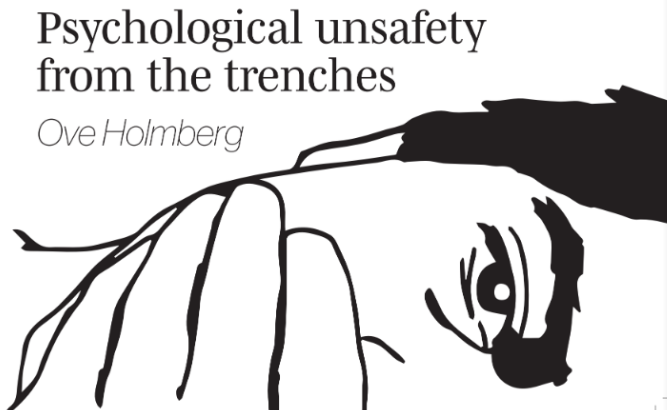 Signed copy from the author

At the big retail company where I worked as an Agile coach, we had not prioritized Psychological Safety in the transformation, but after a guerrilla warfare, I got it up from the backlog’s basement. I started by creating a channel in MS Teams to get the discussion started, and soon the managers hooked on with a dedicated workshop, as well as sprint themes and nice PowerPoints. In a workshop I had a flash talk about signs of ”unsafety” and my own failures to set the new standard for openness. Maybe I was a little bit too sincere, and the managers probably wondered who I was, failing in everything. In the end, at least I got to coach HR in Psychological Safety, which I believe gave the right people the right tools.

At the big gaming company, we had a manager who wanted to be agile. I coached him in this, but he insisted on sitting in his glass cage all day. The words he said at the monthly meetings received applause, but at the copier, people came up to me and told me their worries about their own future. I call this the Xerox syndrome – when you do not dare to talk to your boss but instead turn to the ”union”. This gaming company has been nominated to the ”Great place to work” award but is still a place where you do not question the managers and only spill your beans verbally at the copier. Undoubtedly the most toxic company I have ever worked for.

At the large technology company, we started all meetings with a ”safety check-in”. The same PowerPoint was first shown before the meeting began and questions were asked such as ”Kalle, where is the emergency exit?”  ”Lisa, what is the emergency number?” No cheating with safety here! After praising the company for its high safety, I also brought up questions such as ”Pelle, can you say what you really think here in this meeting?” Speak up!

At the insurance company, questionnaires were sent out with various measurements of staff well-being. The problem was that Psychological Safety was so low that no one answered, as it was a mandatory name field. And those who answered had only praise. When they changed to voluntary participation (with the ‘recommended’ name field), there were more answers – more honest. And over time, more and more people filled in the name field. Another problem with the questionnaires is that they are not transparent. Survey data is seldom presented, which means that people don’t see how the data is converted into actions and therefore gives a feeling of “just another survey”.

Mats Alvesson is a professor at Lund University, Sweden. He has invented the concept of Functional Stupidity, meaning that you think short-term, inside the box, nod in agreement, go with the flow and agree rather than stick your nose out and question. In his books and on YouTube he questions his own employer, but with the Psychological Safety he possesses, he can do that with impunity. Is he the exception to the rule that we shut up – and what can we learn from him?

This book is a summary of highs and lows from my assignments as Agile coach in various organisations. I am well aware that this book just shows one side of the coin, and the other side is left out of scope. People and organisations I mention have probably a different view on much in my book, and one day I hope we can discuss it. It has no ambition to be scientific so much doubt is needed when reading it.